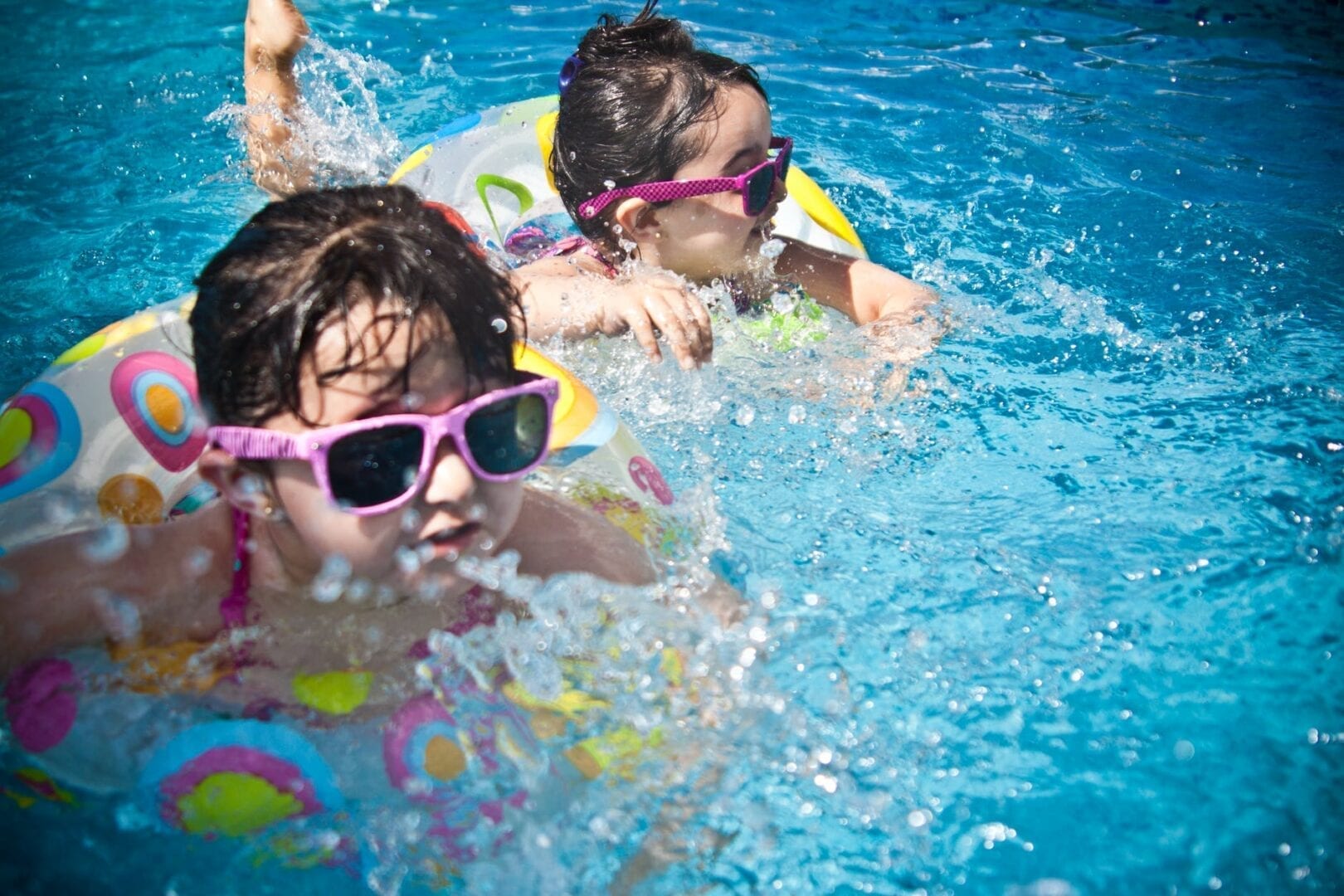 In case your are running out of ideas of games to play in your swimming pool we bring you 23 great options as published on Swimmingpool.com

Looking for some new games to try out during your next pool party? Need a refresh on the classics like Marco Polo? You’ve come to the right place. Check out our list of 23 fun swimming pool games that you can try today.

From volleyball and tag to races and team challenges, there’s something for everybody:

Tell players to get in the pool and line up in a single-file line along the edge of the pool.

First, tell the players to walk around the edge of the pool.

After about 30 seconds of walking, tell them to jog around the edge of the pool.

After about 30 seconds of jogging, tell them to start running. By this point, there should be a strong current pulling them along.

Tell the players to stop and walk in the other direction. It’ll be almost impossible to move against the current!

The more players you’ve got, the stronger the whirlpool. This is a great party game!

A volleyball or a basketball
A net or a hoop

Whether it’s one-on-one or team play, games like basketball and volleyball are even more fun when played in the pool. The best part is that your games can be as organized (or not) as you want. Divide into teams and keep score, or just have fun hitting the ball and shooting hoops.

Either way, these games provide hours of active fun.

Each player takes a dive into the pool, showing off their biggest, loudest, most awkward belly flop. The diver who gets the most applause (or laughter) for their belly flop wins!

Safety first! Always exercise caution when diving or jumping into the pool.

A beach ball
A rope or cord

Place the rope across a section of the pool.

Give each player a beach ball.

When you say “Go,” players use their beach balls to bump each other into the rope. Any player who touches the rope is “out.” The last player in the pool wins!

Divide players into teams and give them one hour to use the supplies above to build their best, most seaworthy cardboard boat. Encourage teams to get creative, and make sure each boat gets a name!

When the time is up, have the teams put their boats in the pool. The boat that stays afloat longest wins!

Safety first! If you’re playing this game with younger kids, make sure an adult is around to help cut the cardboard.

Inflate the crocs and set them adrift in the pool. Give each player a hula hoop. The object of the game is to capture the croc by “ringing” its head or tail. Once someone snares the reptile, they should climb onto its back and race to the shallow end of the pool.

Whoever completes the stunt in the least amount of time wins. Bonus points for the best Australian accent.

Want to get more bang for your inflatable crocodile buck? Have a croc wrestling contest: Give each player a minute 60 seconds, to show off their best, most impressive croc-wrestling moves.

Rubber ducks (one per player)

Give each player a rubber duck and send them one end of the pool.

When you say, “Go,” players must push their duck to the other end of the pool . . . without using their hands! They can push the ducks with their noses, blow on them, or bump them with their foreheads – whatever it takes to get the duck moving.

To make the game more challenging, allow players to “distract” each other by splashing water or trying to knock their ducks off course. The same rules apply, though: No hands allowed!

The first one to get their duck to the other end of the pool wins!

This game works just like the basketball game H-O-R-S-E.

To play this game, the first player performs a task that the others must repeat. For example, if the first player does a handstand in the water, the other players take turns attempting handstands, too. If someone cannot perform the task, he or she earns the first letter in the word fish.

Whoever “spells” fish first, loses. To keep things fair, you may want to make a rule that players can only select a particular task once so that someone doesn’t keep repeating tasks that no one else can do. You might also need an objective judge to determine whether one’s stunt earns him or her a letter.

Pool floaties/rafts – one per player (choose any type you want – as long as they’re big enough to sit on.

Instruct players to get on their floaties and line up at one end of the pool. Choose someone to be the referee.

When the referee yells “Go,” players race to the other end of the pool. Players who fall off of their floaties are disqualified. The first player there wins!

This game works best in a longer pool, and can also be played as a relay race with two teams.

The leader should be in the center of the pool. The watcher should be out of the pool, standing where they can see everyone. The rest of the players should line up behind the leader.

When the watcher says, “Go,” the leader starts swimming. The leader can do anything they want: dog paddle, do a backstroke, swim underwater – nothing is off limits. The players must mimic the leader exactly, and the watcher keeps a close eye on the action, eliminating any players who don’t do what the leader does.

Eliminated players must leave the pool. The last player in the pool is the winner – and they become the new leader.

This modified version of freeze tag is best played in a shallower area of the pool where every player can stand with their heads above water.

Choose one player to be “it.” That person tries to tag the other players. Players who are tagged must stand frozen like a popsicle (with hands straight in the air) until another player thaws him or her by swimming between his or her legs.

A player cannot be tagged while underwater. After a minute or two, have someone else be “it” and continue the game until everyone has had a chance to chase.

It’ll take a while to freeze the T-shirts, so plan ahead and put them in the freezer a day or two before you play!

In this game, the first team to thaw out a frozen T-shirt wins! Divide players into two teams. Give each team a frozen T-shirt and tell them they can use any means necessary to thaw the shirts: the garden hose, the swimming pool, the hot pavement – you name it.

The game ends when one team member successfully puts on the thawed T-shirt.

An empty 2-liter soda bottle (with a cap), with the label removed.

For best results, use a bottle with a white or clear cap or one that matches your pool’s interior. Empty Water Bottles work great too!

Fill the 2-liter bottle with pool water, and close it tightly.

Divide players into two teams, and have the teams move to opposite ends of the pool, facing away from the water.

Throw the bottle into the water. When they hear the splash, the teams can turn around and try to find the bottle. The clear bottle will blend in and become almost invisible at the bottom of the pool. The first team to find it wins!

Pick two players, put them on a pool floatie or raft, and push them to the middle of the pool.

Give each player a pool noodle and let the joust begin! Players joust with the noodles until one player is knocked off of the floatie. The remaining player is the winner.

Before you start, use the permanent marker and number each ball from 1 to 25 (or 30).

Divide the players into two teams. Give each team a plastic bucket and have them move to opposite sides of the pool.

Here’s the catch: Players or teams can only retrieve one ball at a time. When all of the balls have been collected, each team adds up the numbers on their balls. The team with the highest score wins.

The great thing about this game is that it can be customized in a variety of ways. Here are a few variations to try:

Consider awarding extra points when teams collect sets of consecutive numbers.
Instead of marking the ping pong balls with numbers, use colored markers to draw a dot on each ball. Or place a small colored dot on each ball in different colors. Teams must only collect the balls with their color.

First, choose a player to be “it”, and have them stand in the middle of the pool.

Instruct the rest of the players to line up on one side of the pool and try to swim from one side to the other while the person who is “it” chases them and tries to tag them.

The players who are tagged hold hands with the person who is “it.” During the next round, all the tagged players holding hands try and tag the swimmers as they try and make it to the other end of the pool.

Keep going until all players have been tagged – then choose another player to be “it” and start again.

Choose one player to be “it.” The “it” player calls out either “dolphin,” “froggy,” or “submarine”:

“It” has to close their eyes and try to tag the others. When a player gets to the other end, they yell, “Survived!” Players who get tagged become “it.”

A variety of small items such as coins, diving sticks or anything else that will sink (just be sure to avoid anything sharp or anything made of glass). You’ll need two of each item.

Divide players into two teams. Throw your items into the pool (make sure there are two of each item).

The first team to collect all of the items wins.

Pick one player be the “shark.” The rest of the players will be “minnows.”

If a “minnow” player is tagged, the minnow has to leave the group and become a shark. As you play, the group of sharks will grow and the group of minnows will shrink. The last minnow to survive without getting tagged wins the game.

It’s like your very own reality TV show! In this game, individual contestants or teams choreograph synchronized water dances to their favorite pop songs. The more creative the better: Use waterproof props and costumes to make the “show” even more elaborate! You can even use your pool lights to add a little pizazz!

Invite family, friends and neighbors over to watch the performances and vote for a winner. You can even make up different award categories, such as funniest, most original, and so on.

A watermelon (one per team or player)

It’s pretty simple: Players must push a watermelon from one end of the pool to the other. The first one to the other side wins. Put your own spin on the game by adding custom rules, such as:

The best part? When the race is over, you’ve got a healthy snack.

A soaking wet T-shirt (one per team)

Celebrate Mom With A Poolside Brunch

What pool equipment do you need?

If you are interested in our services, send us a message or call us.